Yasuní is a thriving tropical rainforest in Ecuador’s northeastern region, and reputed to be the world’s most biologically diverse place on the planet. Read on to learn about Yasuní Rainforest. 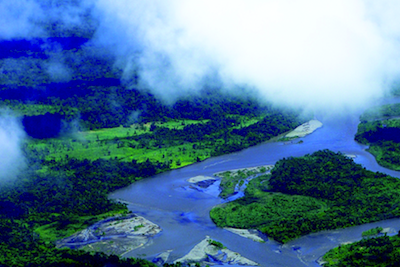 Considered part of the ‘core amazon,’ Yasuní is located at the crossroads of the Andes, Amazon, and the equator, affording its unique biodiversity. Yasuní is an area of land comprised of Yasuní National Park, Waorani Ethnic Reserve, and an encompassing “Untouchable Zone,” designated to protect indigenous peoples and wildlife from environmental and cultural exploitation. Many indigenous tribes, and over 4,000 plant species and 173 mammals call Yasuní home.

Yasuní also sits on top of nearly a billion barrels of crude oil.

There is no place as diverse as Yasuní on the planet and it needs to be protected.

The Waorani (Huaroani) people maintained a hunter-gatherer lifestyle until 50 years ago, when missionaries, and oil producers began taking advantage of their land and exploiting their way of life. Since then, the Waorani have relinquished their nomadic ways, and settled down into smaller communities. Two of the tribes, the Tagaeri and Taromenane, have chosen to live in voluntary isolation from the outside world. They are some of the only isolated peoples in the world today.

Yasuní is also one of the only places in the world where plant, mammal, amphibian, and bird species all reach their maximum biodiversity. This area did not freeze over during the last ice age, also lending it to being an exponentially prolific environment. It has evolved into a refuge for other wildlife, seeking more abundant habitats from deforestation and disasters in surrounding areas. To give you an example of how precious this land is:

Fortunately, there have been attempts to preserve the precious ecosystem, and the indigenous peoples that live there and have inhabited the land for centuries, perhaps thousands of years. But there is a lot at stake.

Yasuni’s rich oil lands have propelled this national rainforest into the global spotlight, including encroaching petroleum extraction companies that are biding for oil block concessions on preserved Yasuni lands, and those valuing to keep the “oil in the soil” and leave the oil left untouched. Efforts to protect Yasuni from potentially toxic extraction projects are underway, with the innovative Yasuni-ITT initiative at the forefront of the crusade:

In 1979, Yasuni National Park was established. Under IUCN regulations, it is a category II.

Precautionary measures were issued in May 2006 by the Inter-American Commission on Human Rights to protect the Tagaeri and Taromenane territory in northeastern Ecuador.

In the summer of 2007, Ecuadorian President Rafael Correa proposed the groundbreaking Yasuni-ITT proposal, which called for international monetary compensation in exchange for keeping Yasuni’s oil reserves underground and untouched. With this proposal, the international community would provide half the reported $7.2 billion value (of Ecuador’s potential oil revenue) if petroleum extraction projects were granted. Therefore, Yasuni-ITT is allowing this developing country to garner much-needed revenue while still protecting precious rainforests – and it’s the first global initiative of its kind.

Furthermore, in September 2008, Ecuador ratified a new Constitution which granted ‘Rights to Nature,’ a first for any country worldwide, and which parallels indigenous communities’ ancient Sumak Kawsay way of living.

As of May 2012, the ongoing Yasuni-ITT initiative has raised enough money to keep the oil underground – for now.